The Artificial Intelligence Center for Advanced Studies (AICAS) and the Saudi Arabian Federation for Cybersecurity, Programming, and Drones (SAFCPD) jointly organized a training course ‘AI for Executives’ on 26/02/2019 at the Digital City, Riyadh. The training event was a huge success as several IT managers from both government and private attended it.
Prof. Abdullah Sharaf Alghamdi, the Chairman of the SAFCPD and General Supervisor of the AICAS, presided the inauguration ceremony. Prof. Alghamdi marked the ceremony with his valuable remarks on the importance and the role of data analytics in transitioning the current technical era, outlined the usefulness of AI in maximizing the results, and criticality of investments in AI techniques.
He reiterated the aspirations and efforts of the Kingdom of Saudi Arabia, led by the Custodian of the Two Holy Mosques, King Salman bin Abdulaziz Al-Saud, and His Highness, the Crown Prince Mohammed bin Salman in transforming KSA into a knowledge-based economy by categorically outlining the commitment and support of AICAS in tandem with SAFCPD to the noble cause, with all the resources and initiatives at his disposal.
The training was kicked off by reviewing the basics of artificial intelligence and its applications in governmental and industrial functions by Dr. Sultan Al-Farhoud, an expert in artificial intelligence techniques.
During the course of the training, the trainees used advanced realistic AI platforms, models, and strategies to solve financial, economic, and environmental problems. 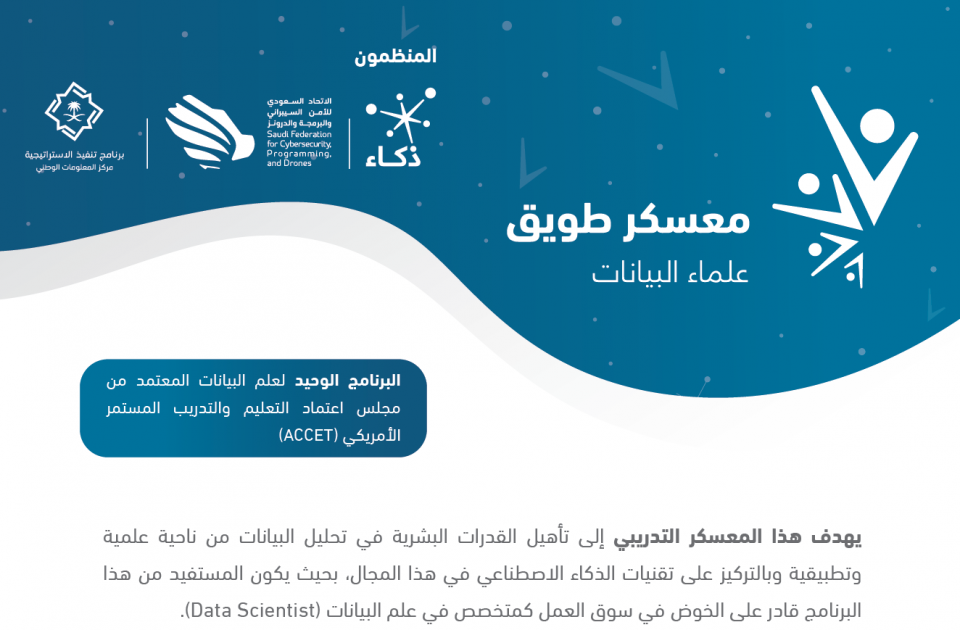 The First AI and Sport Hackathon